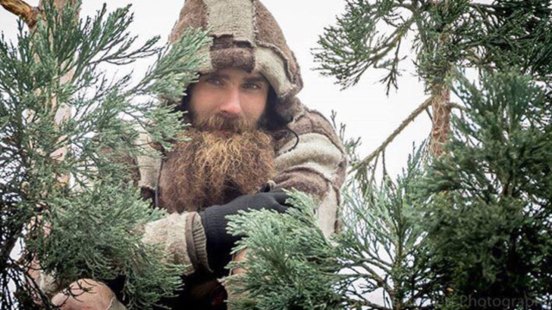 Wow, I miss Seattle. Here’s my take on #ManInTree. May he continue to live in infamy.

Nothing says “Seattle” quite like the Man in Tree incident of March 22, 2016.

On that day, for reasons yet to be explained, 28-year-old Cody Lee Miller climbed all 80 feet of the Macy’s Christmas tree on 3rd Avenue. He would proceed to spend the next 25 hours in the sky-high Sequoia leading us all through a saga of beards, beanies and branches (all documented by the hashtag #ManInTree, of course).

With a flowing beard and patchwork hoodie, Miller looked for all the world like a granola Gandalf. Press outlets ran stories like “Seattle Man Who’s Living in a Tree Can Provide Valuable Beard Lessons” and “Man in Tree Still Chill as Fuck While Reporters Lose Their Minds.” And chill as fuck he was – at one point in the standoff, Miller built himself a bed of branches so he could spend the night in comfort. “Yeah, he made a full-on fort…like, Bear Grylls style,” remarked one KOMO Four cameraman.

Clearly, Miller was in it for the long haul. Seattle PD’s attempts at negotiation proved futile as Miller refused to come down and asked only for Camel Crush cigarettes. He threw orange peels and pinecones at emergency personnel and was observed flipping the bird to spectators taking pictures. “How much taxpayer money are you wasting? It’s not an emergency!” he yelled to concerned police and fire crews below.

Oh, Seattle. Where else could you hold a tree hostage for a pack of menthols? (Portland, maybe, but we don’t talk about them). In a city with a transit system called the S.L.U.T. (South Lake Union Transit if you’re wondering), Miller’s tree antics are right at home. Quirky stuff is part of Seattle’s DNA. To residents, #ManInTree was just another day in the Emerald City. One tie dye-clad local even brought his pet goat to observe the standoff. When interviewed, both goat and owner believed “people have the right to climb trees if they want to.”

The question is, what drove Miller to take to the trees? All we can do is speculate. Maybe he was frustrated by the lack of parking spaces downtown. Or perhaps he was irked the dispensary ran out of his favorite sativa-dominant hybrid. Or maybe Donald Trump winning another primary was so distressing that Miller tried to physically remove himself from the sphere of American politics. Whatever the reason, an 80-foot Sequoia seems a strange place to work out your problems – but who are we to judge?

With leafy nest complete, Miller’s standoff continued through the night. Seattle PD’s repeated attempts to coax him down only agitated him further. Local superhero Phoenix Jones arrived on the scene claiming Miller would come down for a beer and cigarettes, but Seattle PD declined his assistance, saying they intended to wait Miller out. So the #ManInTree stayed en-branched, rousing occasionally to yell profanities at those assembled below.

Miller finally descended at noon the next day. Once on solid ground he sat down and ate a piece of fruit before being arrested for malicious mischief. Barefoot in court he told prosecutors, “Seattle police sent me to hell for climbing a tree,” before being escorted to King County Jail. His bail is set at $50,000. If he makes bail he is ordered to have no further contact with the Sequoia.

Though #ManInTree may have ended, Miller’s behavior will surely have repercussions. What kind of precedent does this set for coping mechanisms? Are we all allowed to take our temper tantrums into the trees from now on? Perhaps group therapy will be exchanged for field trips to the forest to work out anxieties. But this only raises questions about sustainability. The Sequoia sustained nearly $8,000 worth of damage during #ManInTree. With deforestation so rampant, can we as a race afford to further abuse our trees? And more importantly, do the trees deserve our burdens? It’s not as if they produce the oxygen we breathe or anything. Our trees are all worthy of love and respect, no matter how alarming this presidential election may be.

Miller, while we may not yet understand you, we can all admire your dedication (even if you are from Portland). #ManInTree was the biggest Christmas tree scandal since Buddy the Elf cut down an Central Park evergreen, and I speak for us all when I say the distraction was thoroughly appreciated. Thanks for reminding us all how weird and wonderful Seattle can be.

But seriously, stay the hell away from that Sequoia.