This week on NewsTrack I’m looking into The Seattle Times video department.

The Times video department is pretty well known. It was featured on Columbia University’s Video Now project in 2013, so I had fairly high hopes for what I would find when I looked through the top and featured videos. 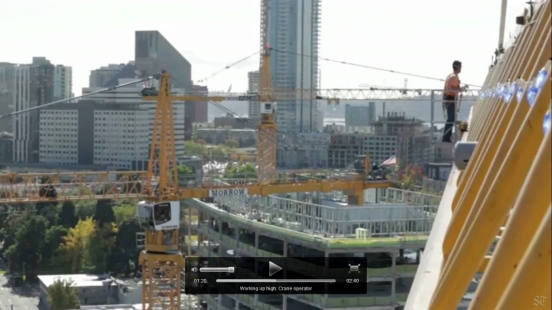 For the most part, the videos are straightforward. Most of them run around 2:30 and are very newsy- they definitely follow the establishing shot/interview/b-roll formula (this crane operator video is a perfect example). There’s nothing wrong with that formula- it’s just kind of boring. I was expecting something more nontraditional, but videos like these do work as separate/accompanying news pieces.

The most nontraditional video I found was travel writer Brian Cantwell’s kayaking video. Cantwell spent a day kayaking around Kauai and documented it in these collection of shots accompanied by a cheerful ukulele tune. This one had potential, but I was ultimately disappointed. For one thing, there wasn’t any speaking. That can be fine as long as the visuals are strong, but the ones in this video didn’t hold up. The lack of variety in the shots meant that I was watching 2 minutes of similar footage without interruption. I liked the ending shot and the water droplet covered shots, but I ultimately thought this was boring.

However, the Times is usually on point with their visuals. The videos, even if they are straightforward, are almost always beautifully shot. The clips of the crane operators working against the Seattle skyline are perfect examples of the Times’ penchant for capturing unique and appealing shots. The cinematography, if you will, is something I always admire.

But I’ll admit, I’m disappointed with the Times video department. After watching Video Now, I was expecting bigger, quirkier pieces than the news-oriented ones I found. I’m going to assume it’s been slow since the Rainier exploration and its accompanying (awesome) videos, so I’m willing to cut them some slack. Hopefully the next time I check, there’ll be more to look at!